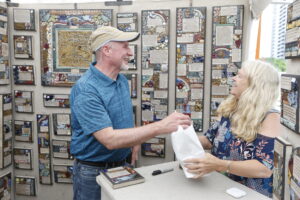 COLUMBUS, Ohio — Notable local and national artists representing 34 states and the province of Ontario will exhibit and sell their work at the 2022 Columbus Arts Festival, produced by the Greater Columbus Arts Council (Arts Council) and presented by the American Electric Power Foundation, June 10-12 on Columbus’ downtown riverfront.

“After two years off because of the pandemic, we’re very excited to welcome our slate of exhibiting artists from all over the country,” said Sean Kessler, Arts Festival director. “Once again, we’re impressed by the exceptional quality of their work, and I think Festival goers will be delighted to see the many returning artists and as well as plenty of new faces.”

In addition to the established artists who exhibit, the Columbus Arts Festival features artists who were selected by the jury panel to participate in the Emerging Artist program. Created in 2011, the Emerging Artist program is for artists who have limited or no experience exhibiting at national festivals. In order to be eligible, artists must be residents of Franklin or the surrounding counties: Franklin, Union, Delaware, Licking, Fairfield, Pickaway, Fayette and Madison. In addition to a lower booth fee, Emerging Artists participate in two artist bootcamps to learn about booth layout, décor, pricing and best selling practices.

Nearly 200 artists, including the Emerging Artists, were selected from almost 600 applicants through a blind jury process. To apply, artists submitted digital images of their artwork and booth set-up through ZAPPlication™. A jury of art experts reviewed the entries, identified only by number, and selected the work based on merit and quality, as well as booth presentation.

To volunteer at the Columbus Arts Festival, please go to columbusartsfestival.org/get-involved/volunteer.

For more information on the Columbus Arts Festival, call (614) 221-8625 or visit columbusartsfestival.org.

Download the Columbus Arts Festival app through the Apple app store or Google Play at guidebook.com/g/#/guides/columbusartsfestival2022.

For a selection of high-res images, visit the Festival’s press media page.

Mission of the Greater Columbus Arts Council: To support and advance the arts and cultural fabric of Columbus. www.gcac.org

The Greater Columbus Arts Council receives major financial support from the City of Columbus, Franklin County Commissioners and the Ohio Arts Council. None of these funds are used for the production of the Columbus Arts Festival.